In these days there is talk in the mainstream media such about the development of human microchip technology that could be used to incorporate the Green pass and many other services on a digital level. Keeping yourself informed and knowing these topics is essential for the development of one’s inner awareness.

The microchip, already active in numerous experiments in Sweden and the United States, has been inserted into tens of thousands of human beings. This allows you to open doors, access data, communicate with digital devices of all kinds and for any eventuality, have ATMs and social security codes incorporated in the microchip along with many other services.

Such as the digital certificate of the Green pass without the need for continuous new quarterly vaccinations. The microchip would be able to know if the body has contracted the Covid 19 virus. These are all working hypotheses that can be easily verified through an internet search.

They are mainstream official figures. No conspiracy, no insanity. Official documents, Wikipedia pages, national television reports around the world. The human microchip is a reality in experimentation, used in various parts of the world, at least since 2012, and it will probably be gradually proposed to the world population through the Overton window method. But what would be the connection between cryptocurrency and microchip?

In 2020, the publicly available patent was filed, as well as the patent for cryptocurrency and associated technologies. Patent WO / 2020/060606 was effectively registered: on March 26, 2020. The patent application was filed by Microsoft Technology Licensing on June 20, 2019 and on April 22, 2020 it obtained international status. The title of the patent is “Cryptocurrency System Using Body Activity Data”.

Reading the patent Those with computer skills can understand how it works. 060606? It’s a joke? A hoax? Check for yourself, the data is all public and verifiable online. The patent is extremely complex for those without computer knowledge. But beyond computer science there are quantum implications, and in a certain sense we could say theological.

The cryptocurrency patent and the subcutaneous microchip

The main technology among cryptocurrencies right now is Bitcoin. Many people who are not involved in finance appear confused when it comes to these things. Finance and experts, on the other hand, completely misunderstand them: they think it is an exclusively economic and financial discourse. Bitcoin is much much more. You are the Bitcoin.

Through the appropriate IT devices such as microchips and other peripherals, the cryptocurrency can aggregate data to validate a proof of work. It is a data mining process with multi-level verifications. Through software it is possible to attribute a certain value to a job test.

The process of validating a proof of work takes place through data encryption: the data are transformed into numbers and travel with a series of checks to be decrypted when they arrive at the recipient. These are the same data packets that are used when we send an email: when the email travels from the sender to the recipient, it is encrypted in an incomprehensible computer language and checked several times until it arrives.

In the next paragraph it is explained that these tests of work and data transfer in the blockchain can concern the activities of the human body in its various aspects: respiration, brain waves, metabolism, physical health, etc. The goal would be to deliver advertisements and to score a certain proof of work. You are the Bitcoin.

In the blockchain, which is publicly searchable, information about what you perceive can be stored. For example you see a certain thing, that information exists and is stored and transferred in the network through the validation process described above.

Potentially your every action, your every breath, your every perception can be encrypted and sent to other users, such as another user, a smartphone or voice device such as Alexa, a smart washing machine, a window in your home that opens with a hand movement, a refrigerator that knows you better than yourself and makes you find your favorite sandwich.

It is not science fiction, it is the refrigerator that a large American company is testing before it is launched on the market right now, year 2021. Check for yourself, it’s all online. Central control in cryptocurrency is not necessary because the information is available to everyone. You are central control and your physical body is the memory that replaces hard drives.

The microchip in the network

The microchip and cryptocurrency can communicate with an external server to transmit and receive data. The human body is therefore not only a transmitter of its perceptions but can also become a receiver. Theoretically it is possible to receive stimulations and electromagnetic waves that modify the metabolism, endorphins and the entire behavior of a human being. Depending on its degree of authority, the server can assign a score to the work tests.

Cryptocurrency and blockchain technology can therefore become the digital memory of humanity, a sort of Akashic record of everything that happens. The hardships of the coronavirus pandemic have been innumerable and have put many people to the test: the answer of world power is total digitization: a microchip inserted in a hand or close to the heart that allows you to overcome problems. You may be eligible for a worldwide citizenship income in digital currency. What do you say?

How does the human microchip system work?

The cryptocurrency is meant for transfer of funds and property. But in this case we are not talking about money: currency is the packet of encrypted data that is transmitted. For example: what you perceive, your information, your body temperature, have a strategic value and become a bargaining chip.

By providing this data, you can get goods and services in exchange exactly as it does with money. An automatic salary. It is the same principle applied by internet companies: you can use their services for free but in exchange you have to provide your data. You have to make it clear what you like, what your tastes are, your inclinations, so that they can offer you the right products. But advertising is not the ultimate goal.

The digital work environment of cryptocurrency is called level 100. A task server 110, a communication network 120, a user device 130, a sensor 140, a cryptocurrency device 150 can be plugged into it. What does this mean? On a platform of level 100, vertical cards are inserted, as happens in computers.

Just like you download apps to your phone and use them. The server, the communication network, a user device, a sensor, and a cryptocurrency device can all communicate with each other, although not all need to be present on the platform.

Blockchain platform and microchip under the skin

A user, for example, can be connected to a server and a cryptocurrency device and be present in different places and blockchains. That is, you exist on multiple levels, in the blockchains, just as you exist in the different telephone directories of your friends. The communication network is 5G internet, the user device 130 is you, the sensor 140 is the microchip, the cryptocurrency device assigns the points.

The microchip can receive and send signals across the network that can influence and direct user behavior. The user device 120 can send and receive information with a device 130, such as smartphones, laptops, laptops, Smart appliances, Smart TVs, etc. In the patent, particular importance is given to the fact that the device can be “wearable”, with the sensor 140 inside.

Sensor 140, the microchip, can transmit information to scanners, MRI sensors, EEG sensors, electroscopy, heart rate monitors, cameras or any other sensor. The scanner can also reveal body activity through voxels.

The platform repeats itself identically in a hierarchical system on different levels: level 200, level 300, level 400 and so on. Each higher level has control over the underlying levels. Something that resembles the existential levels described by Ancient Wisdom. In practice, each higher level incorporates all the previous levels.

The platforms also communicate vertically. What you like to eat? Are you a good citizen? How did you park the car? What excites you? Did you work well? Have you paid your taxes? Do you respect the rules? These are all questions that blockchain information gives irrefutable answers. It is all digitally recorded with alphanumeric encryption.

At the 800 level the platform can connect with volatile devices that function as RAM and cache and other devices that are not specified: the patent is kept open and flexible to new inventions. It is possible to introduce external devices such as CD-ROMs, DVDs, USB memories. Level 800 also has additional horizontal tabs: 860, 870… In practice, new instructions can be inserted from above. You are always in the blockchain at level 100, but level 800 can intervene without you knowing anything.

In conclusion: the human body, thoughts, emotions can interface with digital technology through a microchip inserted in the body, in a hand or in the heart area, and become memories for storing, transmitting and receiving data. The program can also be activated from a remote computer.

End up in someone else’s plans?

If you do not have your own special, ethical plan that you believe in, you risk ending up in someone else’s plans, in an absolute cyber trap, which is based on spiritual and quantum concepts. A computer matrix that assigns you a value in cryptocurrency by recording and assigning a value to your actions, thoughts and behaviors. You get paid directly, even with length and quality of life. No tricks are allowed, control is total.

Having your own ethical plan becomes essential to take control of your life. Through constructive training, these scenarios can be avoided: an ethical lifestyle, respect for what works, love and truth. Take responsibility not to end up in someone else’s plans.

Fabio del Greco made a film in 2018 that today appears incredibly prophetic. This is the Mystery of an employee, released in theaters in February 2019. The film tells the life of Giuseppe Russo, a normal employee who leads an approved life and who discovers during the course of being controlled through digital technology: his thoughts, his emotions, his purchases, his choices of life, faith and politics, are influenced and manipulated by external entities. But Russo is able to sense that something is wrong, and he is not willing to live like a puppet. 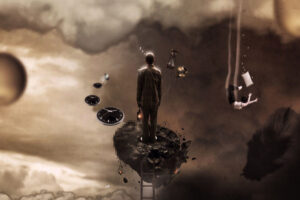 Personal Growth: movies are the most powerful awareness tool