Kenji Mizoguchi, one of the most important directors of all time, was born in 1898 in Tokyo. The father is a modest craftsman who has many financial difficulties and sells raincoats to soldiers during the war against Russia. To survive he moves to the Asakusa community, a place full of popular theaters and very poor artists, and is forced to offer his 14-year-old daughter Suzu as a geisha.

Kenji will always carry memories of this period of his life with him. The death of his mother when Kenji is 17 forces the young man to find any job. Subsequently, his brother, to whom he will be linked for life, manages to give Kenji the opportunity to resume his abandoned research studies to become a doctor.

At the age of 19 he deals with marketing and in his spare time he devotes himself to the organization of theater groups. At 22 he entered the cinema as an actor and in the short space of two years, he directed his first film. In 1925 he has already directed more than 30 very different films: from contemporary films (gendaigheki) to historical films (jidaigheki), to academic films or films drawn from Western literature.

In 1923 a terrible earthquake ruined most of the film library (and the city of Tokyo). Theproduction companies Nikkatsu and Shochikumoved their headquarters to Kansai. In subsequent years, the bombing of Tokyo during World War II and the natural humidity of the climate will do other irreparable damage to the Japanese film heritage.

Kenji Mizoguchi started his directorial business at a time of great turmoil for theindustry film  and cut his teeth with a truly diverse series of films. He had to wait until 1936 with Elegy of Osaka to be able to create a personal work. His auteur filmography continues with The Sisters of Gion in the same year. The warforces him stillto compromise: he is asked to make some historical films of propaganda, including Genroku Chushingura – Revenge of the 47 ronin. At the end of the war, Mizoguchi returns to devote himself to his favorite themes, initially in the form of modern theater and later also holds the position of president of the Director’s Guild of Japan until 1955.

His period of fame begins thanks to the success achieved by Rashomon of Kurosawa in 1951 at the Venice Film Festival. The Western market opens up to Far Eastern directors and recognizes Mizoguchi’s latest works. The director died of leukemia in 1956 in Kyoto while preparing to shoot “History of Osaka”.

The cheeky jazz soundtrack and accompanying opening shots of Osaka’s flashing neon signs create sparkling cityscapes. It is the setting for thistale extremely modernisttypical of Mizoguchi’s style which deals with female sacrifice. The screenplay is by Yoshikata Yoda, a friend and collaborator of Mizoguchi for many years: it is the story of aoperator switchboardof a pharmaceutical company who begins a relationship with her married boss to pay the debts of her family.

The story unfolds against the backdrop of contemporary cafes, outlets, subway stations, and other urban areas that seem a world apart from the images of Japan that most of the West envisions. Likewise , it proved to be a little too ahead of its time; her cosmopolitan view of Osaka and progressive interpretation of public opinion faced by independent contemporary Japanese women made her a moot title in the conservative cultural climate of the time, and distribution was momentarily suspended by the Japanese Ministry of Affairs. impressive Minoru Miki’s photography is, anticipating style Gregg Toland’sin Citizen Kane.

The story takes place behind the scenes of the life of the geishas forced by economic necessities to lead that life. A theme that Kenji Mizoguchi would return to throughout his career in films such as A Woman of Rumor (1954) and Street of Shame (1956). The entertainment district of Gion in Kyoto represents at best the clash between tradition and modernity, embodied respectively by the 2 brothers of the geisha.

Umekichi believes in bad luck, aware of her need for security as she lives her youth, while her brother and younger sister adopt a more severe attitude towards the men who use them as geishas. They both find that their prospects are limited by their profession. An extraordinary work of the director’s pre-war production, once again scripted by Yoda from an early story by Mizoguchi.

Filmed primarily on location amid the rubble and devastation of the Osaka occupation era, this film presents a city much changed from its most vibrant representation in Osaka Elegy a little over a year earlier: a group of women pushed into prostitution by post-war hardships are a world apart from the Sisters of Gion. It is a fascinating moment of transition in Kenji Mizoguchi’s career, a film noteworthy for its gritty neorealist approach and an effective portrayal of Kinuyo Tanaka, the actress who, after her first central role for him in another film set in the city, Osaka’s now-lost A Woman (1940) would end up being closely associated with the director both on and off screen.

first film Kenji Mizoguchi’s for Daiei, the studio most active in pushing Japanese cinema to foreign audiences in the 1950s, Miss Oyu includes Kinuyo Tanaka as the widow of the same name who falls in love with the man she is to get married with her younger sister Shizu. Seeing Oyu’s love reciprocated by her would-be partner, Shizu devises a plan to carry on the fake marital relationship in line with fairness, but to serve as a facade for an otherwise socially impossible relationship.

Based on Junichiro Tanizaki’s 1932 novel The Reed Cutter, this delicate portrait of a ménage à trois markedfirst collaboration Mizoguchi’s  with cinematographer Kazuo Miyagawa, the sophisticated long shots of which would influence the director’s subsequent work.

Kenji Mizoguchi initially gained real recognition outside of Japan with this adaptation of a 17th century tale by Saikaku Ihara, The Woman Who Loved Love, winning an award at the Venice International Film Festival. He had actually been chosen for the Golden Lion award and the director was sad that the young Kurosawa had overtaken him with the surprise victory for Rashomon.

The film provided Tanaka (then 42) with one of her most remembered roles, the daughter of a royal court samurai. The actress plays a variety of character ages over the decades as the narrative depicts her character’s relentless fall through the social strata into prostitution and begging after her forbidden love for a humble page (Toshiro Mifune) is discovered and banned from Kyoto.

A powerful, if not somewhat grueling depiction of a woman at the mercy of the historically rooted patriarchy of Japanese society, the film has been criticized in some quarters as an aestheticization ofthe main character’s suffering. Visuallyit is among the most important works of Mizoguchi, with fluid tracking shots that provide some of the most superb examples of long shots.

Adapted from a short story by Ueda Akinari (1734-1809), this poetic esoteric moral tale set during the civil war period of the late 16th century follows the different fates of 2 brothers who make a living as potters and their particular falls through the desire, murder, greed and conceit – with Mizoguchi’s usual view that it is women who ultimately suffer over their men’s vanities.

The supernatural aspect arrives when Genjuro, is tempted by Lady Wakasa: it is a precursor film of Japanese horror. However, this is a story of discreet thrills, subtle feelings and a strong spiritual dimension, with the dream sequence detailing Genjuro’s arrival at the noblewoman’s manor and subsequent seduction undoubtedly counting as one of the finest sequences of the world cinema.

Few would include Kenji Mizoguchi’s first color film (along with the same year’s historical epic Tales of the Taira Clan) as among his most recognized works. It is however a film of great interest, one of the very first in a series of Japanese co-productions with Hong Kong’s Shaw Brothers initiated by Daiei’s president, Masaichi Nagata, in an attempt to cultivate a cinematic understanding between Japan and its southeastern neighbors. Asian just a year after the war.

Despite the oriental adornments, however, this delightful tale set in 8th-century Tang Dynasty China follows a typical Mizoguchi story, with Machiko Kyo playing the innocent young concubine of emperor Xuan Zong, widowed, who falls victim to his court authorities and the political turmoil of the time. The film may seem a little stiff, however the elaborate costumes and sets, decorated by Kohei Sugiyama’s lavish photography, make it very beautiful to watch.

Kenji Mizoguchi came to life prostitutes for his latest work, appropriately launched in the same year he entered into force Japanese law against prostitution: a film of a short cycle life so-called akasenfilms (“road sign”)that tell the sun setting over this world.

Stylistically reduced from the more lyrical and metaphysical period dramas for which the director is best remembered in his later years, the film sensitively paints 5 women who end up in a series of circumstances in a brothel and their concerns for the future after the its forced closure. Mizoguchi sadly passed away three months after its release, and with it, a whole period of Japanese classic cinema came to an end.

In his incomparable style, in which life seems to flow as if by magic and the long shot technique anticipates the cinema of Antonioni and Jancsó, Mizoguchi has observed the world and its contradictions and changes, the survivals of the past in the labor of a new age. Through a humanist realism, his point of view has been that of an unpleasant observation rather than a denunciation one, and his lyrical, genuine and controlled vision never falls into paternalism and controversy.

Through the spaces, the power of one individual and the nullity of the other are revealed: bows that never end, salamelecchi, individuals who humiliate themselves by crawling on the ground. And despite all these shots of individuals crossing passages and spaces, we never understand what it feels like to live in those houses, as they are simply sets, sets made of rectangular shapes, volumes, lines and cubes, and their surface is fictitious. , part of the very structure of power.

The individuals Mizoguchi focuses on are compulsive, even hysterical in their needs, living in hell, if not the puppet world. “Describe the implacable to me,” Mizoguchi just asked his faithful screenwriter Yoshikata Yoda, at the time of Naniwa hika (Elegy of Naniwa, 1936). “Describe to me the relentless, the self-centered, the sensual … There are only horrible individuals in this world.” In this sense, naturalistic melodrama was the perfect medium: “Everything needs to be in focus … You should compose a fantastic work in the manner of Balzac, Stendhal, Victor Hugo or Dostoevsky”. 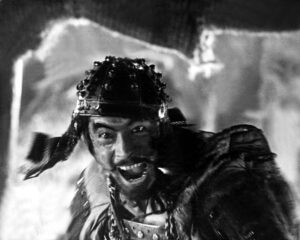 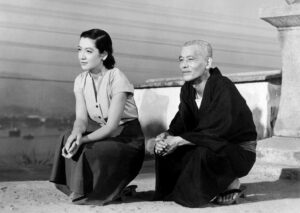 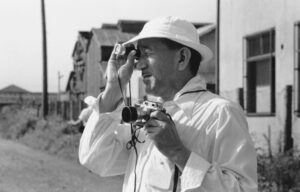