Expressionism was among the fundamental movements in the history of cinema. As in other arts, expressionism aimed to bring the emotions of the characters to the fore. Expressionism’s view of the world is extremely subjective, emotional and non-rational. The unconscious and its most ancestral fears come to life in the work.

Expressionism was born in Europe, in the early 1900s, which lasted until the end of the 1920s. Find the most fertile ground to take root in Germany, a country where an unhealthy atmosphere reigns at that time, while Nazism asserted itself. An atmosphere masterfully rendered by a partially expressionist film such as M, A City Searches for a Murderer, direct by Fritz Lang. In German cities one gets the impression of being able to meet “evil” around the corner: a feeling of omnipresent anguish.

What does expressionism mean? Expressionism, as the word itself says, is the opposite of impressionism. A way of expressing himself that brings the soul and the subjective feeling of the artist to the outside. The sets, the lights and the characters take on extremely unreal, distorted, hallucinatory and grotesque forms. The lights are sharp and contrasted.

The subjective and inner world

The objective world of impressionism and rationalism does not exist. Reality is the mirror of the unconscious of the author of the work of art, often of his deep fears. The unconscious creates reality.

In contemporary times we can see that the success of expressionism went beyond the movements that believed in the objectivity of reality. All new age movements, personal growth, life coaching are in some way related to the theories of expressionism. That is, they claim that objective reality does not exist. That we ourselves create the world around us and all the events and conditions in which our life flows.

German expressionism, however, was born in a dark period. Wars, famines, rationality and positivism that crushed the personalities of the individual, the rise to power of totalitarian regimes. The expressionism of the twenties and twenties is associated with dark, gloomy, gloomy images. Disturbing shadows crawling on the walls, as in Nosferatu by William Murnau, one of the major directors influenced by expressionist cinema.

The theoretical fathers of expressionism are deep psychologists like Freud and Jung, or the philosophers of inner time and consciousness like Henri Bergson. The exponents of expressionism were openly inspired by the themes of Romanticism. But even if they rejected symbolism, it is easy to see the influences that the symbols had on the movement.

Symbolist painters, with the use of strong colors, shapes and figures drawn in a sharp and sometimes violent way, wanted to express their subjectivity like the Expressionists. But their cultural references were not easily understood. A way of working that did not appeal to the expressionists who considered it too difficult to reach a non-elitist audience.

Among the forerunners of the expressionist movement were the painters Munch, Matisse, Van Gogh. Their radical expressiveness of the inner world characterized them through violent colors, the incisiveness of the sign and the use of disused wood engraving.

Among the painters of the school of German Expressionism we highlight the use of deformation of bodies and landscapes, the use of sharp lines and the refusal to use perspective to make the image realistic. The images are flat and fragmented by the lines. What interests them most is expressing the desperation and violent feelings of the subjects they represent. An often gloomy and pessimistic vision.

After painting, Expressionism involves all the arts: from literature to theater, from music to cinema.

The most important expressionist films were mainly produced by the German film production house Ufa. The historical boundaries of expressionism are not precise because other related currents follow pure expressionism, such as kammerspiel and The new objectivity . Movement reaches the cinema especially between the 10s and the 20s of the twentieth century.

Many critics and historians agree that Robert Wiene’s The Cabinet of Dr. Caligari is the only true expressionist film. But the films of Murnau, Lang and Pabst are also considered partially expressionist. Expressionist cinema has as its main characteristic that of distorting reality in a visionary and hallucinated universe with the help of special effects, and above all with light and shadows.

The stories revolve around the supernatural world, the mystery. They are full of dark and evil atmospheres with an exasperated and emotionally strong style. Ghost towns or dizzying architecture like Fritz Lang’s Metropolis are examples of this. Geometric scenographies with angular corners. Heavily made-up faces of demonic or persecuted characters. Painted or real scenography in which the characters move as if imprisoned in a labyrinth.

The Cabinet of Dr. Caligari

The Cabinet of Doctor Caligari by Robert Wiene is the symbolic film of expressionism. Shot in 1920, when the movement had already existed for several years in painting, the film is the story of Dr. Caligari and his sleepwalker patient Cesare. The roles of madman and doctor are continually overturned in the story which is narratively characterized by ambiguity, and visually by geometric, dizzying and cutting frames. Threatening shadows, locations that become dead-end labyrinths. It is the distorted world of Caligari’s crazy mind, inspired by the sets of Italian futurism. A film in which the cinematic image finds the maximum distortion and transfiguration seen up to that moment in the short history of cinema.

Expressionism, the other films

Other famous films that can partially fit into the expressionist style are Nosferatu and Murnau’s The Last Laughter, Doctor Mabuse, Metropolis and Destiny by Fritz Lang, Genuine by Robert Wiene, Stellan Rye’s Prague student, The doll of meat by Ernst Lubitsch.

The two Masters of cinema Fritz Lang and Friedrich Murnau were clearly influenced by Expressionism. Their works, however, have a more personal and less decipherable style, which mixes different influences. The end of expressionism in cinema is identified with Metropolis , in 1927. From that moment on, the importance of Hollywood and American cinema grew. Many German and European directors moved to the United States due to the advent of Hitler and Nazism. Expressionism will continue to influence directors, filmmakers and films in the following decades as well. Even today it is not uncommon to watch a horror or a contemporary science fiction film with some scenes shot in an expressionist style. 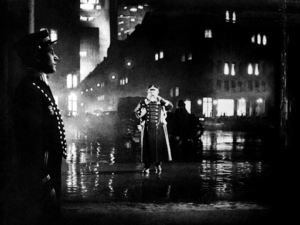 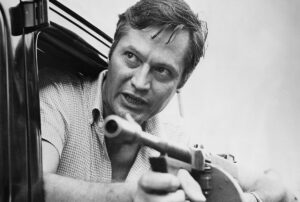