Among the most famous films in the history of cinema there is a sub-genre that generates a lot of interest: that of dystopian films. In a dystopian film the heart of the story is a dystopia, an imaginary reality projected into the imminent future of a totalitarian and totally negative society. It can take on violent or invisible and subtle characteristics.

It can be an obvious and concrete dystopian world or a hidden and invisible world. The dystopian imaginary arises from perceptions and situations of the present to imagine a dark future, the exact opposite of utopia, which instead has a positive value. In the dystopian society, the human being faces terrible and frightening situations. Politics is repressive and technology is used to spy on individuals and deprive them of any personal privacy and freedom.

The new fears of a dystopian world

It is no mystery that dystopia has returned to the attention of the world today.novel George Orwell’s 1984 is again one of the most widely read bestsellers in Western countries. The main cause of these new negative perceptions and fears is probably the great technological and digital transformation we are experiencing and the emergence of political leaders who are unable to avoid crises of all kinds, which occur rapidly.

To these changes was added the covid 19 pandemic that created in the streets of the world those scenarios that we used to see only in science fiction films such as The Last Man on Earth. Deserted streets and home isolation for the entire world population, curfew, social distancing and fear of the other, alienation and fear of disease.

The Birth of Dystopian Cinema

There are countless films that have used settings of this type, starting for example with dystopian horror interpretations such as George Romero’s Night of the Living Dead. Or the more recent Contagion, which deals more directly with the theme of the virus. To confirm the interest and fascination of filmmakers for a dystopian and negative world is the large amount of short films and independent films made in the last two years on the subject during the global lockdown.

Among the 45 films in competition at the Indiecinema Film Festival, five dealt with issues related to the virus and set their stories in a dystopian context. This interest of cinema towards dystopia is justified above all by the narrative mechanism: what films do best, as the great masters of the history of cinema have explained, is to narrate the external conflict, the struggle of the individual against society.

The man against society

Unlike the theater which focuses more on the interpersonal conflict between the characters, unlike literature and the novel capable of deep inner investigations, cinema gives its best when man fights against external perhaps. Obviously this is not always true.

There are many filmmakers who have made films that are completely focused on inner or interpersonal conflict. A good script encompasses all three levels of conflict in its development. But it remains evident that the external conflict, the protagonist who fights against the external world and society, is the one most suited to the cinematographic work.

Many great directors, starting with Fritz Lang, have carved their testimonies into films that recount their experiences in twentieth-century dictatorships. Horrors and dystopian societies that now belong to the past and to history. But the dystopian world in movies and novels is always something that has yet to manifest itself, a bad omen that belongs to the future.

The most famous dystopian work of art with which the very concept of dystopia is often identified and 1984 by George Orwell. Big Brother has become famous all over the world and never ceases to be impressively topical. Perhaps because Orwell has centered in this novel one of the fundamental knots of human existence: the instinct of overwhelming the dark powers towards citizens. A phenomenon that we can observe globally at all latitudes.

Fortunately, it is a phenomenon that also has a positive function: that of increasing people’s rebellion and awareness of those who want to dominate and exploit them. The more the dystopian and violent world, the more it generates a better world. In literary and cinematographic works, however, the happy ending is not so frequent.

In 1984 Winston Smith surrenders to the brainwashing of the totalitarian Big Brother regime. In many films the protagonist does not survive the monstrosity of dystopia. But fortunately, reality confirms that the opposite is true. Attempts to eliminate the dignity and freedom of the individual fail and help create a better world, even if the price is high.

If freedom and well-being were not already in our power now, we should always hope for someone willing to grant them to us. And even if things went well, we would still live in fear of losing wealth and freedom due to an unfavorable change in those in power. This is the life that leads to slavery and the psycho-penitentiary: the hope of having something better and the fear of losing what you think you already have. But handing over freedom and wealth into the hands of the outside world already constitutes a state of slavery in itself.

Here are 9 independent and lesser known dystopian films that you absolutely must see.

Transposition of Orwell’s novel made by British television with actor Peter Cushing. A television film that at the time of its release caused a lot of controversy and several parliamentary questions. Virtually unknown and never released in many countries outside the UK, it is one of the most interesting versions of George Orwell’s novel in theaters.

Who spies on the life of the poor employee Giuseppe Russo? Between old and mysterious VHS tapes that portray him in his youth whose origin he cannot explain, to a family and social situation that he cannot decipher, the protagonist discovers in the course of the film the mystery that lies behind his life. A mystery that has dystopian origins. Director Fabio Del Greco constructs a philosophical and existential metaphor on the invisible conditioning mechanisms that society pours out on each individual. At the same time, the film is also a reflection on the power of control that the internet and new technologies have over our lives.

Surreal love story set in an industrial and desolate setting between a director and his woman. In this case the dystopian world is the civilized and industrialized world of a desolate metaphysical periphery, surrounded by the chimneys of industries, emptied of all humanity. The couple tries to escape to a place outside of civilization, where they can recover their feeling of love and their primitive human dimension, in contact with nature. Very particular film that at times uses quotations in a style reminiscent of many films by Jean Luc Godard, with images of great figurative power. A film with a strong symbolic and evocative charge that is a reflection on the dystopia that we have already created by filling the world with factories.

An interesting short film about the fear and anguish of how much dystopia could be hidden in the coronavirus epidemic. A writer can no longer write controlled by voices and screens telling him what to do. A character that immediately brings to mind the Winston Smith of 1984.

A man, played by the same director of the film Fabio Del Greco, gets stuck away from everyone due to the lock down for covid-19. It is a moment to confront himself, with his memories, his desire for freedom and travel, with the need to mourn the loss of his father. A film in balance between fiction and documentary, the exteriors were filmed with a mobile phone, while the interiors were filmed with a professional camera. It’s all true: the deserted streets, the need to go out all the same hiding in the pine forest, the obsessive search for an open bar to have a coffee, the memory of the recently deceased father. Conspiracy on the internet and news on TV. In a new world, which seems to have come out of a dystopian film. In search of a look at things beyond time and space.

A virus is putting humanity at risk and a couple decide to take refuge in a country cottage isolated from the world. But is it enough to stay away from everything and everyone to save yourself? Shot in black and white with a rigorous and meditative direction, with a slow and hypnotic rhythm, Ananke is a rather extreme and radical first work in its staging. Set in the mountains of the central Apennine, in Abruzzo, Claudio Romano’s film tells the conflict between metropolis and nature, between loneliness and society. An arthouse film that explores the difficult theme of isolation from civilization and how closely man is actually closely linked to it.

The Last Man on Earth

The film that invented zombies, although they are still called vampires here. A post apocalyptic world where Vincent Price tries to survive the attacks of the living dead every night and to find a lifeline to his loneliness by day, wandering through a deserted Rome full of corpses. First the company of a dog and then the meeting with a woman give him the illusion that he is not yet the last man on Earth. There are groups of surviving men who have organized themselves into armed military groups, which will prove to be even less human than the zombies.

A short musical and experimental film suspended between science and tribalism. In a surreal laboratory of a blinding white that recalls Kubrick’s 2001, some scientists try to isolate the virus of love to prevent it from infecting the whole of humanity. The protagonists dance in white space suits and wear masks that seem to increasingly distance their identity. Not to be missed also for the beautiful musical piece in Neapolitan dialect from which the images are born.

Funny and grotesque short film, shot with an adrenaline rush. In a dystopian future, Europe and America have united in the so-called Democratic Federation. The only way for immigrants who come from poorer countries to be accepted by the federation is to participate in a TV show called Tao and fight against opponents to win their residence permit. 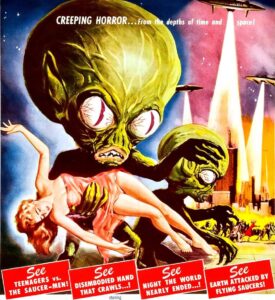 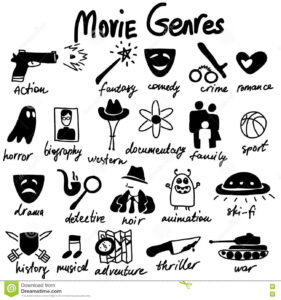