The holy mountain is a place according to the alchemical tradition that is located on the island of the Lotus, an Island that does not exist. Those who can reach it can know the secret of truth and the world from the 9 immortal keepers who live there: those who can teach how to abandon one’s self and become part of the great One, how to enter into harmony with the universal consciousness.

Alejandro Jodorowsky takes his first steps in the world of cinema in France. He makes Fando y Lis and later is El topo. This latest film is very popular with John Lennon which gives him the possibility of great visibility. He will be the one to convince his manager Allen Klein to produce the holy mountain, leaving complete creative freedom to Jodorowsky.

The holy Mountain by Alejandro Jodorowsky is one of the most bizarre and absurd cult movie in the history of cinema. You will rarely see such a show, so radical and visionary, so shocking and perfect in every shot. Each image is a painting with alchemical powers that has been studied in detail.

An independent film produced like a blockbuster, with impressive mass scenes that become figurative paintings of enormous power and complexity. Going around the holy mountain for the Jodorowskys must have been very tiring. Within scenes with hundreds of extras, the most hidden details are treated in the same way as the main subjects in the foreground. A way of working of enormous figurative value, reminiscent of that of the master Federico Fellini.

The sacred mountain, the story

The alchemist is a kind of prophet, interpreted by Jodorowsky himself, an enlightened man who possesses a greater wisdom that he wants to pass on to his disciples. Become the spiritual guide of the protagonists in search of the higher consciousness towards the journey on the holy mountain. It is a journey that the protagonists, men and women among the most powerful and influential in the world, want to make to take possession of the secret of immortality, snatching it from the hands of the keepers who live on the mountain.

The film is a critique of human society on several levels. At the beginning of the story we see a dwarf cripple moving through the streets of a large Latin American city, full of hundreds of bloody bodies at the mercy of Western tourists who photograph them as if they were inside a primitive folkloristic manifestation. Soldiers march through the streets showing off dead birds. War is a show to satisfy the greed of corrupt Latin American governments. Soldiers are commanded like robots and instigated to commit the most horrific crimes, while civilized countries watch the spectacle passive, using horror as entertainment.

In this whirlwind of violence and blood, the protagonist of the story enters the scene who is a kind of Jesus Christ, associated with the fool’s tarot card, who arrives in the world with his saving mission. But who soon realizes that he has now become only a pawn of the Catholic Church, a manipulated puppet for spiritual propaganda and its illusions. An instrument of religious power to subjugate the population in search of a meaning in their life.

Jesus is now nothing more than a plastic figurine sold in a religious souvenir shop or hung in a church. It is the merchandising of a spiritual film shot to retain audiences and acquire new customers. Christ, manipulated and exploited, rebels with a cry of despair, and tries to free himself by reaching the alchemist’s laboratory. The alchemist is forced to a drastic therapy on Jesus, to make him find a new balance. He balances his energies to prepare him for the path of knowledge, for his liberation from the role of religious icon of the church.

But to arrive at the truth, Christ needs new traveling companions. Men and women enter the scene one after the other who embody the strong powers of the world: owners of the welfare industries, producers of arms of war, kings of finance and heads of institutions, building contractors and police chiefs. We are presented with their lives with a series of scenes that show us their homes, their work and private life. They represent greed, the lust for luxury, the instinct for war domination, manipulation and control of the masses.

They are individuals who enslave the most ignorant and defenseless masses through all kinds of power. These characters want to evolve from their low level of consciousness to find the higher truth. To do this, on the recommendation of the alchemist, they dispose of all their material goods and their riches and become the traveling companions of Jesus, in the ascent to the holy mountain, to steal the secret kept by the immortals and give it to the world, so that the consciences of men and of themselves evolve on a higher plane.

The holy mountain: the symbols of the movie

Jodorowsky is a scholar and aficionado of tarot cards on which he has written several books. It leads us on this visual journey to discover their meanings. Tarot cards are divided into 22 major and 56 minor arcana. Jodorowsky shows us the symbolism of the twenty-two major arcana to seek the path of self-realization. From the first station, the card of the Fool, to the final universal symbol, the World. To arrive at an understanding of the world, therefore, we need the Fool to light us the way.

The film is full of esoteric and alchemical symbols hidden in every shot: union of opposites, red and blue fluids that mix, symbols of mercury and transformation, peacock tail feathers, images of mandalas, traditional 7-petalled roses of the Rosicrucians, symbols of Jungian psychology. The whole film is a hallucinated and psychedelic journey into the maze of the unconscious.

The themes of The holy Mountain

The theme of the film is the one faced by the greatest filmmakers in the history of cinema, the theme of cultural conditioning and the path to break these chains that keep us prisoners. Jodorowsky deals with the theme, however, in a more direct way and in an alchemical and spiritual key. Alejandro Jodorowsky, multifaceted Chilean artist of Ukrainian origins, writer, poet, filmmaker and spiritual guru, creates with The holy Mountain a grotesque and dramatic film at the same time, full of shocking and symbolic images that try to remain at a level of understanding suitable for a viewer who knows no alchemical arguments.

The images in fact communicate directly with the unconscious without the need for rational explanations, but in Jodorowsky’s visual labyrinth, however, something escapes a first vision. Maybe even the second. Each shot, even those that last a few seconds, has different layers of meanings and symbols, on which one should pause as one does when reading a complex illustrated book or contemplating the paintings in an art gallery. The director tries to guide the viewer to discover the allegories that hide behind his images.

The Illusion of Reality

In India they call the Maya reality which means illusion. The material reality of the world around us is only appearance, it exists only at a superficial glance. The truth is hidden behind appearances just like a cinema screen: we see our desires and dreams projected onto it but if we get close they are not real, they are just lights and shadows on a white cloth.

Quantum physics has been investigating for some time what is the core that makes up matter, and has come to the conclusion that on a deeper level there is no matter. What exists is only energy. Everything is energy. Energy vibrates at very high speeds and different vibrations produce different types of matter. The slower the vibration, the more solid the matter. For example, a rock with an extremely slow vibration of energy. Matter would therefore be pure illusion.

Illusion does not mean that it does not exist: just like the cinema screen it is real. But it is only the appearance of something else that actually exists. The secret of immortality according to Jodorowsky is that in reality birth and death are nothing more than episodes of our eternal life.

Life without death would be meaningless, an endless existence. Death defines life and gives it intensity, every moment becomes precious because time is limited. But if life were eternal who would care about living? According to Jodorowsky’s mystical vision, and according to many spiritual and oriental traditions, death is like Maya, the appearance of matter. Our true life is eternal, matter is limited to changing shape through the cycle of reincarnation, the flame of life disappears from one body and passes to another body. Even when there is no body, life continues in the Divine dimension.

Social conditionings, in their most diverse aspects, are probably one of the most explored themes by great filmmakers. The universe represented by the Jodorowskys in The holy Mountain is a world prisoner of the most violent and horrible social conditioning. Human society appears as an absurd and insane farce. Religions, states, industries, fashions, appearances: all contribute to the realization of the worst possible society. Even Jesus Christ realizes that he is nothing more than a plastic icon manipulated by religious power.

The difficult and tiring ascent of the holy mountain leads to a single truth: that the absurd and grotesque theater of human society is only a dream, a nightmare with open eyes, it is only a hallucination. The search for truth turns out to be simpler than it seemed: The truth is that there is nothing to know, there is nothing to understand. The truth hides from superficial glances and hides behind the shadows projected on the cinema screen, just get closer and observe it carefully. 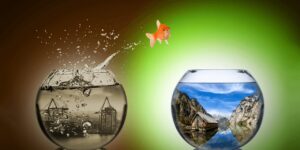 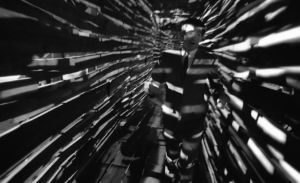 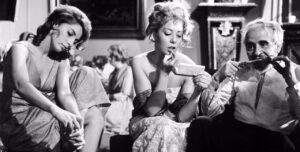